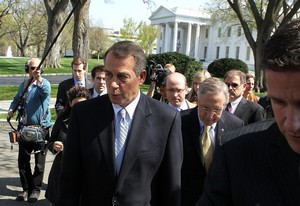 WASHINGTON, DC - APRIL 07: U.S. Speaker of the House Rep. John Boehner (R-OH) (4th L) and Senate Majority Leader Sen. Harry Reid (D-NV) (3rd R) leave after they made statements to members of the press April 7, 2011 at the White House in Washington, DC. Both Boehner and Reid had a meeting with President Barack Obama earlier to discuss the budget proposal for FY2012, the third meeting in a few days. (Photo by Alex Wong/Getty Images)

U.S. equities continued to suffer from the political debate over the debt ceiling, with all three major indices opening in the red on Monday as President Obama and John Boehner, Republican and Speaker of the House, failed to break a stale mate.  Greece suffered another downgrade at the hands of Moody’s, sending the price of gold to new nominal highs.

Stocks opened lower as investors anticipated a weak session on political weakness.  By 10:23 AM in New York, all three major equity indices had bounced off their lows but remained in the red, with the Dow Jones Industrial average at 12.612, 69 points below its Friday close.  The tech-heavy Nasdaq, dealing with lay-offs at Research in Motion, traded down 13 points to 2,846, while the S&P 500 was down half a percentage point or 7 points to 1,338.

Debt ceiling talk has taken all the headlines and continues to worry investors.  With time running low to avert a sovereign debt default by August 2, debt ceiling deadline, Senate Majority Leader Harry Reid (D-Nev.) faced off with Speaker of the House John Boehner (R-Ohio) but did nothing more than propose partisan bills that would make an agreement hard to imagine.

Rocking equity markets, news that BlackBerry maker Research in Motion is to cut 2,000 jobs and reshuffle senior management took the stock down more than 3% to $27.05.  RIM has been under heavy fire recently, with shareholders, employees, and analysts flashing a red light.  The company is shedding about 11% of its workforce as it tries to keep up with competitors in the smartphone space including Apple iPhones and Google-powered Android phones.

Gold hit a nominal high of $1,624.07 during the early Morning, retreating to $1,617.6 at the time of writing.  Added to continued uncertainly over the future of the U.S., European debt woes provided support for the shiny metal.  Specifically, Greece was once again downgraded by Moody’s.  This time, a three notch downgrade to Ca, essentially ratifying that a default is imminent.

This entry was posted on Monday, July 25th, 2011 at 4:59 pm and is filed under European Union, Gold, National Debt, stock market, xcd. You can follow any responses to this entry through the RSS 2.0 feed. You can leave a response, or trackback from your own site.